Gentle Barriers is a collaborative interdisciplinary project by Montreal artists Amery Sandford and David Carriere that combines drawing, 3D modelling, and sound. With these artists coming from their respective backgrounds of visual arts and music, the project will be an exploration and intersection of dialogue between contemporary art, video, and pop music. Using Blender, a 3D modelling software, the artists plan create four to seven short animations that will be accompanied by music scored by Carriere. These animations will be a moment for experimentation for creating characters that populate the mysterious constructed worlds in Sandford’s drawn and printed works that investigate cultural spectacle in public space.

David Carriere is a musician based in Montreal, Quebec. He is a guitarist, songwriter, and producer for TOPS, a Montreal born pop group that gained international attention after their debut release Tender Opposites in 2012. He is releasing a new record with TOPS in the spring of 2020 and has taken the post of producer on a number of projects, most recently Deborah by Sorry Girls that was released by Arbutus Records in October 2019. Together David and Amery make music under the name Born At Midnite and are releasing an EP with Arbutus Records in 2020.

Following a January Residency and Solo Exhibition, “What keeps things together, when things fall apart” at Grenfell Gallery, Melanie Colosimo will be participating in Eastern Edge’s studio residency from January 20th to February 2nd  ‘During this residency I will be creating soft sculpture works representing power and connection.  These works will be limp, warning of the challenges inherent in any form of progress, communication and connection. This is a continuation of my soft sculpture works which underlines the precariousness of the Atlantic region’s situation. By robbing these structures of their potency, I mock their function by reproducing them from materials that are malleable and flimsy.’ 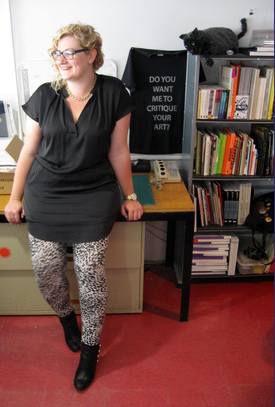 With a Soft Gaze: Hazel May Eckert’s Over Time

All These In-betweens- Visual arts news